Simply put, cellulite is fat pushing against the connective tissues of the skin. This creates the lumpy, dimpled look. fear. Cellulite is NOT a fat problem (though excess fat will only increase the appearance). Cellulite is a SKIN problem.

Picture an over-stuffed mattress. The stuffing bulges out where it is not tethered down. That sums up the appearance of cellulite.

The causes of cellulite are not well understood, but there are several theories.

Diagram of how cellulite forms 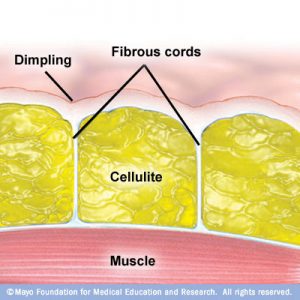 Genetics – certain genes are required for cellulite development. Genes may predispose an individual to particular characteristics associated with cellulite, such as gender, race, slow metabolism, distribution of fat just underneath the skin, and circulatory insufficiency.

Diet – people who eat too much fat, carbohydrates, or salt and too little fiber are likely to have greater amounts of cellulite.

Lifestyle factors – cellulite may be more prevalent in smokers, those who do not exercise, and those who sit or stand in one position for long periods of time.

There are several therapies that have been suggested to remove cellulite, but none have been supported in the scientific or medical literature. Therapeutic methods for cellulite that are physical or mechanical include:

Unfortunately, none of these methods have been scientifically proven to work.

A second class of cellulite removal strategies consists of drugs that are supposed to act on fatty tissues. There is a wide range of pharmacological agents which are used for getting rid of cellulite, including: 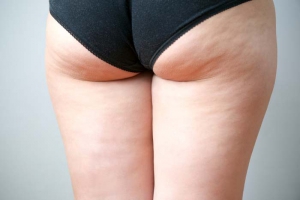 Cellulite may affect up to 90% of women at some point in their lives.

People with cellulite have tried to apply these agents topically, orally, or by injection, but none have been proved effective.

Some people with cellulite wear special clothing called compression garments to reduce the appearance of cellulite. These garments try to compress arteries and increase blood and lymph flow to reduce visual cellulite.

Cellulite reduction techniques such as liposuction and dieting actually do not remove cellulite. However, eating a healthful, balanced diet and exercising may be the best way to reduce the fat content in cells and reduce the appearance of cellulite.

There is currently no medical research to support the effectiveness of anti-cellulite creams in getting rid of cellulite. There is no scientific proof that anti-cellulite creams work, and there is no concrete way to measure cellulite, either.
— src Dr. Lisa M. Donofrio, an assistant professor of dermatology at Yale University School of Medicine, and Tulane University School

of Medicine, 2003
She tells her patients that cellulite is normal, and is likely the product of genetics and hormones.
Dr. Garry S. Brody, a professor of plastic surgery at the University of Southern California agrees with this statement: “Women who believe that they can eliminate cellulite through creams, or even weight loss, are likely to be disappointed.”

Eating healthy, low fat foods such as fruits, vegetables, and fiber can help one to avoid cellulite. Similarly exercising regularly, maintaining a healthy weight, and reducing stress are recommended to prevent cellulite.

After many decades of debate about what exactly cellulite is, there is some understanding of its complexity. It is now recognised to be a condition that develops in the skin and the co-existing underlying fat. While there is always a familial or genetic influence on whether or not we form cellulite, some factors are now established:

Recent studies conclude that cellulite is more than just ordinary fat. To treat it successfully, we have to understand the structure of fat, where it is distributed in the body, what causes it to form cellulite, and what then sets cellulite apart from fat.
Cellulite – its structure

Our skin covers our body surface. Just underneat the skin is a layer of fat that insulates the body. This is subcutaneous fat and it occurs over most of the body. We need this fat layer to maintain body temperature (thermoregulation – it is an inbuilt blanket)

cushion against mechanical trauma,
provide body contour and fill up body space
this fat layer is a source of energy.

Fats are also called lipids, for the purpose of scientific discussion. When we store fats (lipids) for energy, they are accumulated in the fat cells (or adipocytes). Inside the fat cells, they are stored as “fatty acids”, combined with glycerol to form a molecule of triglyceride.
When energy is required, the triglyceride molecules are broken down into glycerol and fatty acids that are metabolized as an energy source. The adipocyte is actually our storage cell.
A collection of fat cells or adipocytes storing fat forms adipose tissue. What we commonly think of as “fat” is a form of loose connective tissue that is found beneath the skin, around muscles and organs.

Dr. Nurnberger and Dr. Muller studied skin and subcutaneous fat in order to understand cellulite better, in the 1970’s. In the female body, they found that, the uppermost layer of the subcutaneous tissue (or hypodermis) consisted of freestanding fat cell chambers (filled with fat cells), separated by vertical walls of connective tissue called septa.
The top (apex) of these upright fat chambers was in the form of an arc-like dome, which was weak and prone to collapse when undue pressure was applied. This pressure could be the result of excess weight, fluid retention or lack of strength due to little or no exercise. These larger chambers generated smaller compartments of fat cells (known as papillae adipose) that clustered tightly under the skin.
This combination of freestanding fat cell chambers and compartmentalized clusters of fat cells are the elements that create the change in appearance in the skin’s surface that we call cellulite.

Difference between men and women in this regard –
the hypodermis – they found that the men had smaller fat cell chambers with oblique septa; this latter structural difference affords

more strength to the septa and enables them to withstand collapsing under pressure. They also noted that the smaller compartments of fat cells (papillae adipose) had the same structure in men and women.
Thus, Drs. Nurnberger and Muller hypothesized that this difference in structure of fat cell chambers may predispose women to cellulite more so than men. Interestingly, men with more feminine characteristics tend to have fat cell chambers similar to women, thus inferring that hormones may control this aspect.

How Does Cellulite Form?

Stage One
In stage one, several changes occur in the dermis, not visible on the outside, resulting in a deterioration of the skin’s dermis. Thus, the integrity of the blood vessels and capillaries forming the transport network all around the skin  slowly weakens.

Similarly, the upper region of the dermis begins to lose some of its capillary network. Fat cells, housed within the freestanding fat cell chambers, begin to engorge with lipids, often swelling 2-3 times their original size. Fat cell clumping may commence at this stage as well. Fluid begins to accumulate in the tissue, most likely due to a breakdown in the capillary system.

Projections of fat begin to occur in the dermis and there is an increase in Glycosaminoglycans (GAGs), which may account for the enhanced ability for tissues to retain excess water.4

In stage two, dermal deterioration continues and the microcirculatory system continues to decline. Fat cells engorge further and clumping is more pronounced, pushing the much-needed blood vessels further away. It is not uncommon for gaps to appear in the dermis, which may be the result of the normal inflammatory process, which activates specific enzymes such as collagenase and elastase, creating an available path for immune cells to migrate to the site of inflammation.3 Fluids continue to accumulate. At this stage, “orange peel” skin is now evident.

In stages three and four, the microcirculatory system continues to deteriorate, slowing metabolism in the cells of the dermis. Both protein synthesis and the repair process are reduced drastically, which may contribute to a thinning of the dermal layer. Protein deposits begin to form around fat cell clusters. Pinching the skin between finger and thumb at this stage demonstrates a definite “orange peel” effect. By stage four, hard nodules are evident in the dermal region. These are comprised of fat cell clumps encased in a hardened protein shell.

This is the final stage in cellulite formation.

Cellulite is most likely due to a combination of factors. We now understand the structure of the hypodermis and the differences in women. We now know from numerous studies that each of the four stages in cellulite formation is distinguished by changes in the molecular and structural level. Now we must examine what is the trigger mechanism and what is orchestrating this condition known as cellulite.

According to Drs. Sherwitz and Braun Falco, one of the causes of the rippling effect of cellulite is fluid retention in adipose tissue.3 They noted that, along with an engorgement of fat cells, cellulite tissue showed clear evidence of fluid invasion in the connective tissue fibers of the upper layers of skin. They concluded that not only do the retained fluids cause visible swelling of thighs, hips and abdomen, but that the toxic wastes the fluids contain break down collagen and elastin fibers that help to keep the skin smooth and firm.

Further studies by Drs. Nurnberger and Muller confirm this finding and indicate that there is a definite decrease in the number of elastin and collagen fibers in cellulite tissue. It is believed that, as we age, these structural proteins generally begin to stiffen and lose their flexibility. Engorging fat cells, accumulated fluids and toxins and poor circulation can exacerbate the loss of firmness. All of these factors are believed to contribute to the formation of cellulite.

While the actual cause of cellulite is the result of a breakdown in the connective fibers, one must remember that the reason for this breakdown is most likely a decline in the circulatory system. Although toxic accumulation and fluid retention certainly are major contributing factors to cellulite formation, it is poor circulation (blood and lymphatic flow) that ultimately creates the right environment for cellulite formation. Loss of circulation to an area – whether caused by lack of exercise, too much sitting, clogged
arteries or nutrient deficiency – can have a serious impact and accelerate cellulite formation. That is why cellulite generally appears in areas that have poor circulation; unfortunately, once it forms it slows circulation in an area even more.

What can be done to Treat Cellulite?

Aside from weight loss, exercise and liposuction, the number of treatments that are effective in treating cellulite are limited. Even massage, once touted as being effective in treating cellulite, probably does more harm than good. If a professional performs a firm, kneading type of massage on cellulite areas, she may actually stimulate additional fluids into the tissues. Unless accompanied with a means of improving blood and lymph flow out of the tissues, massage may only exacerbate the problem.

On the other hand, a lighter form of massage, known as Manual Lymphatic Drainage (MLD), stimulates lymph flow and may in fact be one of the most effective means of treating the causes of cellulite. MLD is a light, rhythmic pumping massage pioneered by Dr. Emil Vodder. This technique has the unique result of aiding in the elimination of lymphatic fluids without increasing blood flow. It is recommended that it be done at least twice a week, or even daily, for best results. However, this is a therapeutic technique that
requires proper training and certification before it can be effectively performed.

Aromatherapy Oils for Treatment
The use of essential oils in conjunction with MLD is an especially effective technique. These oils help stimulate elimination and improve circulation and lymphatic movement. Some of the essential oils that we recommend include: